Skip to content
Breaking News
Balen Shah maintains his advantage in the Kathmandu mayoral election Kathmandu election live results & Local election updates Kathmandu metropolis votes count to start from 8 am The Top T20 Cricket Leagues Around the World CRM IN A NUTSHELL
Home Viral Is Aubrey Hall In Bridgerton Based On A Real Place?

The lavishly decorated Aubrey Hall in the new season 2 episodes has Bridgerton fans charmed. Find out where the location is and if it’s based on a real site.

The ancestral home of the Bridgerton family is Aubrey Hall. Because of its amazing and stunning designs, the massive home has attracted viewers from all over the world.

Let’s have a look at where the place is in the real world and learn more about the amazing structure. 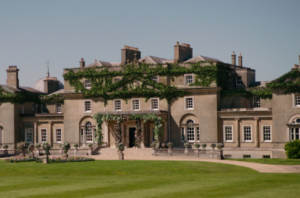 Is Bridgerton’s Aubrey Hall based on a real place?

Aubrey Hall is based on a genuine location. Several times in the series of novels, it is addressed. It is the birthplace of all eight Bridgerton siblings. It is known to be the place where everything changes in both the novel and the series.

Aubrey Hall is also more than simply a backdrop. It is extremely important in the Bridgerton family’s upbringing. The property is surrounded by gorgeous gardens with vines and grey stone walls, and is near verdant pastures and lakes.

The Hall has a particular meaning for each of the siblings, which adds to its significance. Despite the fact that the siblings are all from the same family, their stories are not the same. They’re all linked to specific places, things, and smells.
Audrey Grace Marshall’s Parents: Who Are They? Bridgeton Filming Locations Meet Fairly OddParents Actress Siblings And Family

Aubrey Hall is a pivotal character in the historical drama series. Due of its vast size and rich detailing, the series’ producers confessed that they couldn’t capture the aforementioned location on stage.

As a result, Wrotham Park in South Mimms, Hertfordshire, is used to film the Bridgerton ancestral home. The Park, which is located in Eastern England, is only a short distance from London. To make it seem appropriate for the depiction of the historical monument, only minor adjustments were made to the inside and outside of the structure.

The mansion, which was designed by Issac Ware, was inherited by John Byng and passed down to his son George Byng. The property is still owned by the Byngs. Several movies and television shows have used the site as a filming location. The property is located in Potters Bar, Barnet, EN5 4SB.

Guide to Season 3 of Bridgerton

Bridgerton creator Chris Van Dusen has stated that the series has been renewed for the third and fourth seasons, following the huge success of the first season.

Season 3 is already in the works, according to insiders. It could debut as soon as the spring of 2023. The series is based on the same-named book by Julia Quinn, an American author.

At the time of its broadcast, Bridgerton was the most-watched original series on Netflix. In its first 28 days of availability, the series was watched by 82 million households, according to the streaming giant. Later, in October 2021, Squid Game eclipsed the period drama as Netflix’s most-watched series.